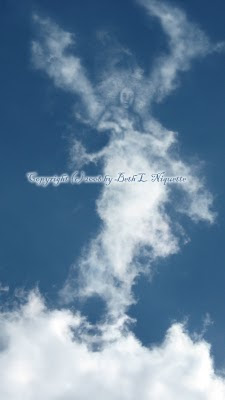 We were on tour, well on our way to California, where we had two weeks of drama performances scheduled.

It was late when we arrived in Grants Pass at the Super 8 Motel. My husband pulled the van and trailer in front to sign in, while the children and I waited in the van.   Through the big double glass doors, we could see him talking to the clerk inside.

Suddenly a small red car screeched into the parking lot, slamming to a stop next to us. A bony young man, with longish hair slicked back behind his ears, jumped out the passenger side door.

He did not see us through the tinted windows of our van, but we saw him. It was obvious something was not quite right. His eyes were open so wide the whites of his eyes glittered around his pupils. There was a weird clacky, jerky energy about his movements.

The man stood with clenched fists, his knees flexed. Then to our astonishment he ran full tilt at the double doors. And bounced off them. My husband and the clerk, talking and laughing inside, didn't seem to see or hear him. The thin man gave the doors a dirty look, clenched his teeth and tried again.

The kids and I watched open mouthed, as he flung himself toward those glass doors over and over again. It was as though there was a thick invisible wall which wouldn't let him pass. Hidden inside the van the kids and I stifled our laughter. He would stop, look baffled, then in a kind of frenzy try to shoulder his way through. But the doors would not give way.

Finally the man stopped, grinding his jaw from side to side. Seething with frustration he glared at the door, shouted a few choice expletive deleteds, spun on his heel, ran back to the car and sped spitting gravel around the corner to the parking lot behind the building.

Later I asked my husband if he noticed anything. But he and the clerk had been oblivious to the drama at the double doors. After we'd settled into our room, I discovered I'd left a small suitcase in the van. Normally I would have gone out by myself, but I felt so uneasy I was compelled to ask Alan to go out with me. We took time to put anything out of sight a thief might want. Out of the corner of my eye, I noticed that red car sitting in the shadows of the trees at the back edge of the parking lot.

The next morning we awoke to the sound of sirens. The Motel was swarming with policeman. Someone had smashed in the windows of every car parked around our van and trailer. The robbers had stolen stereos, luggage, and money. They took whatever they could pick up, tear out and take away. But our van and trailer were untouched.

Angels? I am convinced an Angel stood in front of those double glass doors to prevent something terrible from happening that night. Angels walked with my husband and me to the parking lot and back. They instructed us to tuck away anything a thief might want. They stood guard over our van and trailer.

I often wonder what that young man must thought, as he kept bouncing off that invisible wall of protection God had placed in front of the double glass doors of the Motel.
Posted by Beth Niquette at 12:37 PM 7 comments: